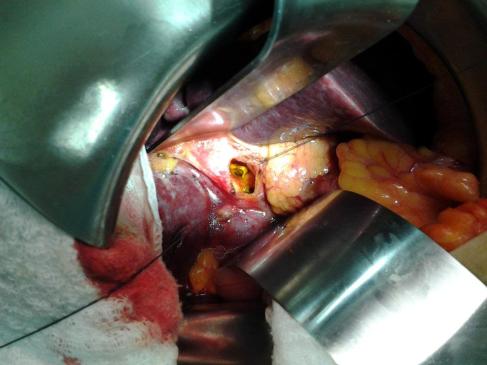 The operative conduct of the biliary-enteric anastomosis centers around three technical steps: 1) identification of healthy bile duct mucosa proximal to the site of obstruction; 2) preparation of a segment of alimentary tract, most often a Roux-en-Y jejunal limb; and 3) construction of a direct mucosa-to-mucosa anastomosis between these two. Selection of the proper anastomosis is dictated by the indication for biliary decompression and the anatomic location of the biliary obstruction. A right subcostal incision with or without an upper midline extension or left subcostal extension provides adequate exposure for construction of the biliary-enteric anastomosis. Use of retractors capable of upward elevation and cephalad retraction of the costal edges are quite valuable for optimizing visual exposure of the relevant hilar anatomy.

Division of the ligamentum teres and mobilization of the falciform ligament off the anterior surface of the liver also facilitate operative exposure; anterocephalad retraction of the ligamentum teres and division of the bridge of tissue overlying the umbilical fissure are critical for optimal visualization of the vascular inflow and biliary drainage of segments II, III, and IV. Cholecystectomy also exposes the cystic plate, which runs in continuity with the hilar plate. Lowering of the hilar plate permits exposure of the left hepatic duct as it courses along the base of segment IVb. In cases of unilateral hepatic atrophy as a result of long-standing biliary obstruction or preoperative portal vein embolization, it is critical to understand that the normal anatomic relationships of the portal structures are altered. In the more common circumstance of  right-sided atrophy, the portal and hilar structures are rotated posteriorly and to the right; as a result, the portal vein, which is typically most posterior, is often encountered first; meticulous dissection is necessary to identify the common bile duct and hepatic duct deep within the porta hepatis.