After the first major hepatic resection, a left hepatic resection, carried out in 1888 by Carl Langenbuch, it took another 20 years before the first right hepatectomy was described by Walter Wendel in 1911. Three years before, in 1908, Hogarth Pringle provided the first description of a technique of  vascular control, the portal triad clamping, nowadays known as the Pringle maneuver. Liver surgery has progressed rapidly since then. Modern surgical concepts and techniques, together with advances in anesthesiological care, intensive care medicine, perioperative imaging, and interventional radiology, together with multimodal oncological concepts, have resulted in fundamental changes. Perioperative outcome has improved significantly, and even major hepatic resections can be performed with morbidity and mortality rates of less than 45% and 4% respectively in highvolume liver surgery centers. Many liver surgeries performed routinely in specialized centers today were considered to be high-risk or nonresectable by most surgeons less than 1–2 decades ago.Interestingly, operative blood loss remains the most important predictor of postoperative morbidity and mortality, and therefore vascular control remains one of the most important aspects in liver surgery.

“Bleeding control is achieved by vascular control and optimized and careful parenchymal transection during liver surgery, and these two concepts are cross-linked.”

First described by Pringle in 1908, it has proven effective in decreasing haemorrhage during the resection of the liver tissue. It is frequently used, and it consists in temporarily occluding the hepatic artery and the portal vein, thus limiting the flow of blood into the liver, although this also results in an increased venous pressure in the mesenteric territory. Hemodynamic repercussion during the PM is rare because it only diminishes the venous return in 15% of cases. The cardiovascular system slightly increases the systemic vascular resistance as a compensatory response, thereby limiting the drop in the arterial pressure. Through the administration of crystalloids, it is possible to maintain hemodynamic stability. 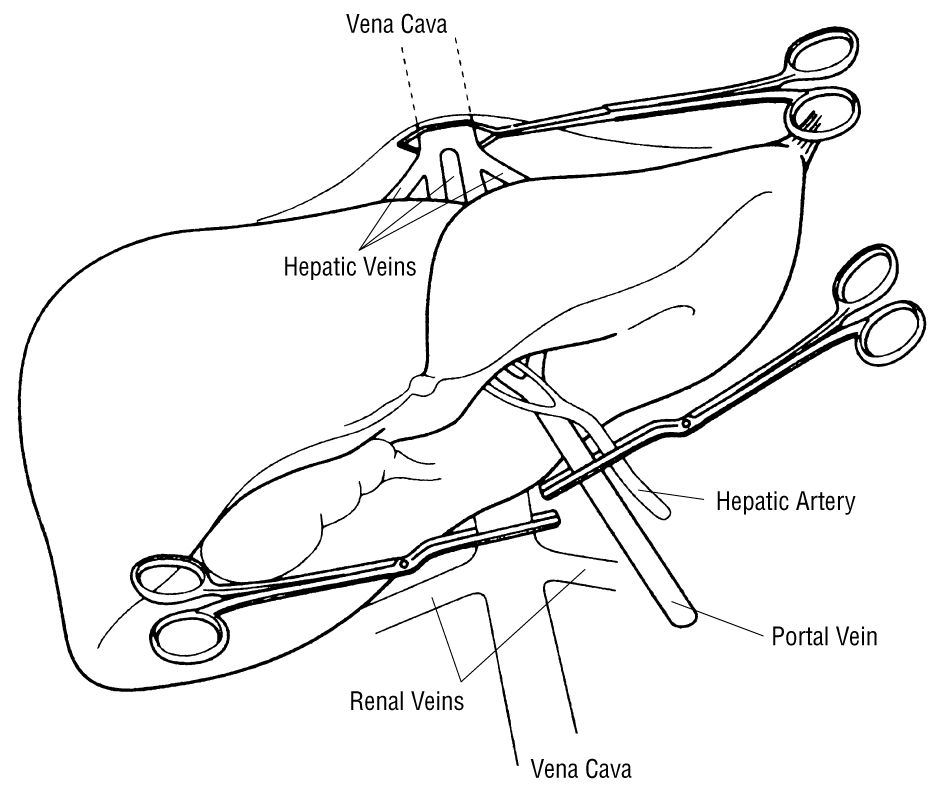 In the 1990s, the PM was used continuously for 45 min and even up to an hour because the depth of the potential damage that could occur due to hepatic ischemia was not yet known. During the PM, the lack of oxygen affects all liver cells, especially Kupffer cells which represent the largest fixed macrophage mass. When these cells are deprived of oxygen, they are an endless source of production of the tumour necrosis factor (TNF) and interleukins 1, 6, 8 and 10. IL 6 has been described as the cytokine that best correlates to postoperative complications. In order to mitigate the effects of continuous PM, intermittent clamping of the portal pedicle has been developed. This consists of occluding the pedicle for 15 min, removing the clamps for 5 min, and then starting the manoeuvre again. This intermittent passage of the hepatic tissue through ischemia and reperfusion shows the development of hepatic tolerance to the lack of oxygen with decreased cell damage. Greater ischemic tolerance to this intermittent manoeuvre increases the total time it can be used.

Junte-se a 451 outros seguidores
Follow The SURGEON on WordPress.com