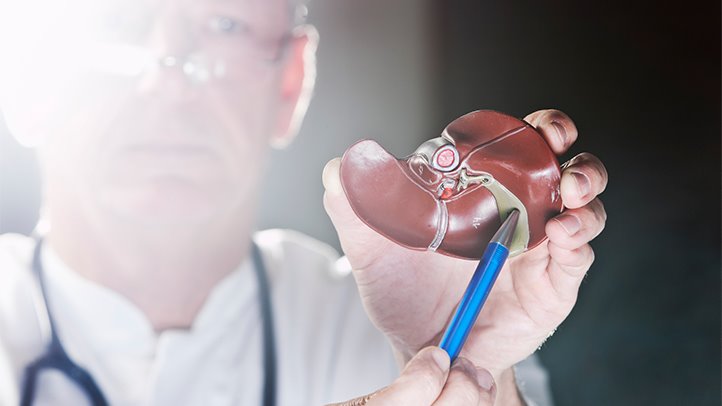 Gallbladder cancer is uncommon disease, although it is not rare. Indeed, gallbladder cancer is the fifth most common gastrointestinal cancer and the most common biliary tract cancer in the United States. The incidence is 1.2 per 100,000 persons per year. It has historically been considered as an incu-rable malignancy with a dismal prognosis due to its propensity for early in-vasion to liver and dissemination to lymph nodes and peritoneal surfaces. Patients with gallbladder cancer usually present in one of three ways: (1) advanced unresectable cancer; (2) detection of suspicious lesion preoperatively and resectable after staging work-up; (3) incidental finding of cancer during or after cholecystectomy for benign disease.

Although, many studies have suggested improved survival in patients with early gallbladder cancer with radical surgery including en bloc resection of gallbladder fossa and regional lymphadenectomy, its role for those with advanced gallbladder cancer remains controversial. First, patients with more advanced disease often require more extensive resections than early stage tumors, and operative morbidity and mortality rates are higher. Second, the long-term outcomes after resection, in general, tend to be poorer; long-term survival after radical surgery has been reported only for patients with limited local and lymph node spread. Therefore, the indication of radical surgery should be limited to well-selected patients based on thorough preoperative and intra-operative staging and the extent of surgery should be determined based on the area of tumor involvement.

Surgical resection is warranted only for those who with locoregional disease without distant spread. Because of the limited sensitivity of current imaging modalities to detect metastatic lesions of gallbladder cancer, staging laparoscopy prior to proceeding to laparotomy is very useful to assess the
abdomen for evidence of discontinuous liver disease or peritoneal metastasis and to avoid unnecessary laparotomy. Weber et al. reported that 48% of patients with potentially resectable gallbladder cancer on preoperative imaging work-up were spared laparotomy by discovering unresectable disease by laparoscopy. Laparoscopic cholecystectomy should be avoided when a preoperative cancer is suspected because of the risk of violation of the plane between tumor and liver and the risk of port site seeding.

The goal of resection should always be complete extirpation with microscopic negative margins. Tumors beyond T2 are not cured by simple cholecystectomy and as with most of early gallbladder cancer, hepatic resection is always required. The extent of liver resection required depends upon whether involvement of major hepatic vessels, varies from segmental resection of segments IVb and V, at minimum to formal right hemihepatectomy or even right trisectionectomy. The right portal pedicle is at particular risk for advanced tumor located at the neck of gallbladder, and when such involvement is suspected, right hepatectomy is required. Bile duct resection and reconstruction is also required if tumor involved in bile duct. However, bile duct resection is associated with increased perioperative morbidity and it should be performed only if it is necessary to clear tumor; bile duct resection does not necessarily increase the lymph node yield.

Esophagectomy can be used to treat several esophageal diseases; it is most commonly used for treatment of esophageal cancer. Esophagectomy is a major procedure that may result in various complications. This article reviews only the important complications resulting from esophageal resection, which are anastomotic complications after esophageal reconstruction (leakage and stricture), delayed emptying or dumping syndrome, reflux, and chylothorax.

PREVENÇÃO DO TROMBOEMBOLISMO NA CIRURGIA DO CÂNCER DO APARELHO DIGESTIVO